The largest joint in the human body is the knee joint. It has a highly complex system of ligaments, which are responsible for the mobility and stability of the joint. The most important ligaments are the posterior and anterior cruciate ligaments, as well as the interior (medial collateral) and exterior (lateral collateral) ligaments. 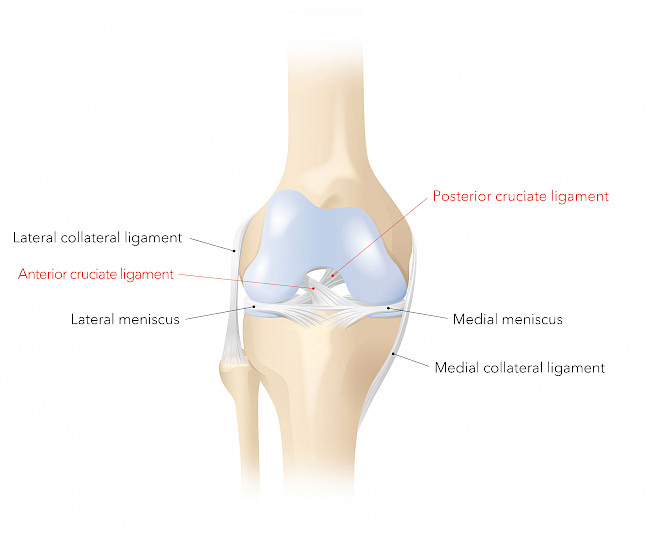 A posterior cruciate ligament tear is usually accompanied by a loud cracking noise, following by a brief period of pain. The torn blood vessels and nerve fibres cause articular effusion and restricted mobility. Once the swelling goes down and the pain subsides, those affected will experience instability in the knee. 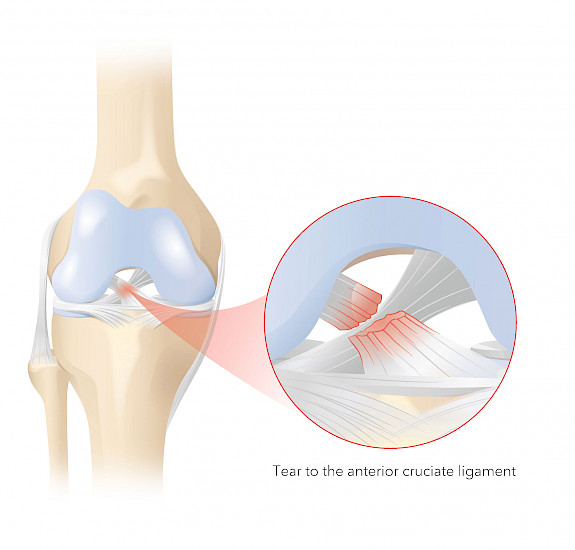 Cruciate ligament tears frequently occur in sports that require a bending and rotating movement of the knee joint with a fixed lower leg, such as skiing, but also in sports with quick changes of direction, such as football or basketball.

During the diagnosis, first the doctor will check the stability of the knee. There are various manual and technical tests for this.

The knee is often checked manually using a procedure known as the ‘drawer test’. In the drawer test, the lower leg is pulled forward with a slight jerk while the knee is bent. If the lower leg can be pulled out like a drawer, this is an indication of a tear in the anterior cruciate ligament.

MRI scans are used to determine exactly which structures in the knee are affected.

The following therapies are available to treat a cruciate ligament tear:

Cruciate ligament tears can be treated conservatively or surgically. The chosen method depends on various factors, such as the age and needs of the patient (e.g. sporting and professional requirements), as well as the type and location of the cruciate ligament tear and any concomitant injuries (e.g. an additional meniscus tear). Any previous damage to the knee joint (cartilage damage, arthritis of the knee) also plays a role.

Conservative therapy is used when there are no other injuries apart from the cruciate ligament tear, e.g. an additional meniscus tear. This treatment is also only suitable for patients who do not do a great deal of strenuous sporting and professional activities. In the course of conservative treatment, physiotherapy is used to build up the muscles and stabilise the knee joint. If the instability persists despite treatment, surgery may be required.

In young and very active people, a cruciate ligament tear is treated surgically. This prevents consequential damage, such as a meniscus tear or arthritis of the knee. The procedure is performed using various minimally invasive methods, such as arthroscopy.

The procedure is performed using minimally invasive arthroscopy (joint endoscopy). Concomitant injuries (e.g. a meniscus tear or cartilage damage) can be treated in the same operation.

During the procedure, the surgeon cuts out a piece of another tendon in the patient’s body and inserts it into the affected knee. The tendon transplant is usually taken from the tendon on the inside of the thigh muscle. The replacement tendon is then fixed in place with screws, buttons or pins. It is positioned in such a way that it can, to the greatest possible extent, adopt the function of the original cruciate ligament. The procedure is performed as an arthroscopy.

The posterior cruciate ligament is longer and more stable than the anterior. A tear occurs when a high degree of force is applied directly to the bent knee.

To repair the posterior cruciate ligament, an arthroscopy is carried out. The transplant is fixed in place using dissolvable screws and clip anchors.

After drilling into the upper and lower leg bones at the original site of the posterior cruciate ligament, the transplant is inserted via arthroscopy and fixed with screws (dissolvable) and clip anchors.

Unlike with anterior cruciate ligament reconstruction, the aftercare is very conservative.

The type of aftercare depends on the procedure and which cruciate ligament was operated on.

Following surgery for an anterior cruciate ligament tear, crutches are used for two weeks to relieve pressure from the knee. Then a course of intensive physiotherapy for three to six months is used to exercise the knee. A knee bandage is worn for support.

How long will I have to stay in hospital after the cruciate ligament reconstruction surgery?

Depending on the procedure, you may have to stay in hospital for up to five days.

The operation usually takes around 60 to 90 minutes.

When can I go back to work after the operation?

If you do office work, you should be able to return after six weeks. If your job involves more demanding physical activity, you may be off work for up to three months.

When can I start exercising again after the procedure?

Our specialists have many years of experience. We guarantee a quick, professionally competent clarification and consultation as well as treatment according to the most modern possibilities.
To the overview of all doctors
Online appointment booking

To load this element, it is required to consent to the following cookie category: {category}.